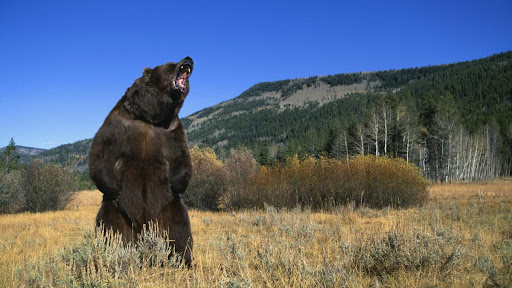 America is abundant in wildlife, and while, obviously, most species are no threat to humans (this is not Australia), potentially lethal collisions do happen, but not as often as you might think. According to the statistics, your odds of being killed by an animal are slim compared to other causes of death. Heart diseases, cancer, and unintentional injuries claim the lives of hundreds of thousands of people annually, while animals are responsible for only 400 human fatalities on average.

Still, no one wants to become a statistic. That’s why we asked experts from one of the largest stores marketing hunting gear to write about the most dangerous animals in the U.S. You’ll learn where these animals live, what the conditions of encounter might be, how to defend yourself, and what survival gear to pack for safe outdoor adventures.

Most Dangerous Animals in America

The U.S. deadliest animal is not grizzly or alligator – it’s deer. Annually, about 200 deadly deer-related car accidents happen. However, we’ll be talking about face-to-face encounters that you bear a risk of experiencing while hunting, fishing, hiking, off-road biking, or camping.

Bears have a reputation for being the most dangerous animals in North America. In the U.S., all three species – black, grizzle, and polar bear – can be found, and all three inhabit Alaska. As for the contiguous United States, over 300,000 black bear individuals populate the western and eastern regions of the country, with little presence in the central area. Grizzlies are relatively small in number. Montana, Wyoming, Idaho, and Washington number 3200 individuals, while Alaska numbers 30,000 bears.

Though they all share a big, heavy, scary appearance and sharp claws and teeth, their reaction to humans differs, which means your defense strategy will also vary. Regardless of what species you encounter, DO NOT RUN. Bears can run at speeds exceeding that of humans – 25-35 miles per hour – both uphill and downhill.

The grizzly is the most aggressive, bad-tempered bear, which makes it the most dangerous bear species. The best defense strategy against them is playing dead. Loud noises, making yourself big, and threatening gestures are ineffective and can only put the bear out of temper. Wildlife specialists say that if the grizzly charges, you should lay on your stomach with your hands clasped on the back of your neck and legs spread for stability. Fight back only if the attack persists. Try smacking the bear’s face with whatever is at hand.

Black bears are smaller and a bit less aggressive. However, if one charge, fight back and don’t play dead. Use the same strategy for polar bears.

Regardless of the abovementioned, bears rarely attack humans and kill only 1-2 people annually. If you keep your distance and make yourself heard from afar when traveling, surprise encounters are minimal. If a surprise encounter still occurs, identify yourself as a human – speak to the bear in a calm voice and slowly wave your arms – and stay calm, even when the bear bluff-charges. Then slowly retreat while keeping your eyes on the bear. Don’t look into its eyes directly.

Remember that the best strategy is total avoidance, so always pay attention to your surroundings. When preparing for outdoor ventures, pack bear spray.

These prehistoric reptiles inhabit marshes, lakes, and rivers in the southeast of the U.S. In particular, Florida is known for being home to 1.3 million gators and, concurrently, the only state with a community of the American crocodile, the alligator’s cousin.

The easiest way to distinguish between a gator and a croc is by the snout. Alligators have a broad, round one, while crocs have their pointed and narrow. And this has to do with the type of food they eat. Being coastal creatures, the crocodiles primarily eat fish, although their diet can include birds, crabs, snails, and small mammals. Alligators are opportunistic animals, and they will eat pretty much anything. That’s why their jaws are specifically designed for biting and crushing.

See also  Why Do Working Professionals And College Students Love To Live In Pg Facilities?

The two reptiles also differ in behavior. Crocodiles are shy creatures and will most likely flee once they detect human presence. On the other hand, alligators are bolder simply because they’re more common and have gotten accustomed to humans.

Still, American alligators are not looking to feast on human flesh. Annually, gators kill 0-1 people on average, and most gator attacks are caused by mistaken identity. When a person swims, thrashing around, the gator takes them for a wounded animal and, being opportunistic, charges. If you’ve found yourself in the alligator habitat, pay attention to the surroundings near the water and refrain from swimming, especially around dawn and dusk.

The cougar, a.k.a. mountain lion and puma, inhabit the western region of the United States. Depending on the dominant landscape of a particular place, this big cat can be found in forests, lowlands, mountain deserts, and open areas.

Generally, cougars don’t recognize humans as prey. However, since our population is expanding, individuals neighboring humans may attack in a condition of severe starvation. Juvenile cougars searching out new territories are also responsible for some attacks. Yet, cougar encounters are rare, occurring about four times annually, with 0-1 fatality.

Usually, people get attacked when biking or skiing because the image of fleeing prey stimulates the cougar’s instinct to chase. For that reason, don’t run in the event of a cougar encounter. And don’t behave passively – playing dead or standing still will make it easier for the big cat to finish you. Behave proactively and assertively. Be loud and seem large, and don’t look it in the eye directly. Throw rocks and sticks in its direction, but not directly in it. In case of a charging cougar, protect your neck and fight back vigorously.

There are about twenty species of venomous snakes in the U.S. But while a total of 7,000-8,000 Americans get bitten annually, only 5-6 bites end up with a fatality due to a delayed or lack of medical treatment. Most venomous strikes accrue to the three groups – rattlesnakes, copperheads, and cottonmouth snakes.

See also  Why Is the Cost of Electricity Rising?

Copperheads, inhabiting the southeastern United States (from Pennsylvania to Texas) are responsible for the most snake bites. Due to their cryptic camouflage, they blend with the forest floor and become easy to tread on by accident. Unlike rattlesnakes, copperheads don’t give warning signs and strike immediately.

Cottonmouth is a semi-aquatic species found around shallow lakes, marshes, and slow-moving streams in the southeastern United States. These vipers bite rarely, falling back on attempts to flee or threat displays, but their venom can be lethal.

When in the snake country, wear snake-proof footwear.

Annually, bees, wasps, and hornets become responsible for 50-60 human deaths due to the allergic reaction. Particularly, you should beware of the yellowjacket wasp and the killer bee.

Yellowjackets build their nests in trees, protected places, and, most importantly, underground. That’s why you should pay attention to where you step when hiking or hunting. Unlike bees having stingers that pull free of their bodies and cause an individual’s death, wasps can sting repeatedly.

Killer bees, or Africanized honey bees, populate the southwest United States. Though their sting is as potent as that of regular bees, they are easier to provoke. Swarming faster and in larger numbers, they fight viciously and then can remain agitated for several hours, attacking everyone crossing their territory from afar.