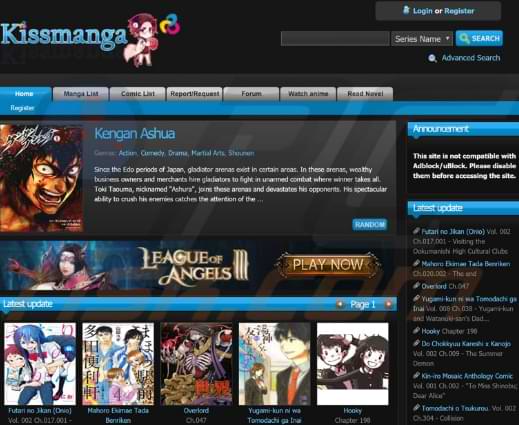 KissAnime and KissManga have been working for years. It has created a place in the hearts of manga and anime fans. Now, these pirate sites have been shut down permanently. These sites were famous because they provided the latest anime and manga to the viewers.

As piracy laws were in navigation for about a decade to serve a deep community. Finally, these sites were taken down by stricter piracy laws from Japan. The first closure news came for KissAnime on August 14. The official confirmation arrived on the Discord of KissAnime by the official support team. Official Support team stated that “All files are taken down by Copyright owners. KissManga and KissAnime will be closed forever. Thank you for your support. Thank you for those years”.

In June 2020, the parliament of Japan has proposed a copyright law to punish those people who knowingly downloaded or uploaded anything on the illegal pirated manga sites. This proposal can support creators and distributors to look for legal alternatives to their anime and manga.

KissAnime is a website that focuses on Anime streaming. It also allows its users to stream or download any anime shows, movies, and TV shows. But these sites are free of cost and all the activities of downloading and uploading were illegal. It was famous as it also has a sister site that is popularly known as KissManga.

KissAnime was well-known and famous as “one of the world’s biggest streaming anime websites”. TorrentFreak stated that it may be possible that KissAnime had been viewed by about millions of people and also it was the most visited pirated site in the world.

KissManga is an important source for people who love manga and Japanese literature. There were many people around the world who didn’t know anything about manga. There could be many people who don’t understand the difference between manga and anime. The style of Japanese comic books and graphic novels was popularly known as Manga. Manga comics focused on young adults.

Anime also aimed at young adults. The style of Japanese film animations is known as Anime.

Manga started in comic and book form but gained popularity on the websites as time changed. The Internet expanded and due to the expansion it introduced different kinds of websites for Manga lovers. It has provided a chance to create own manga novels for readers. This helps many people in the time of the Pandemic.

KissManga website is a popular website for manga readers. Readers can read a number of manga books and series. KissAnime and KissManga were sister sites. Both of these websites have successfully worked for 8 years.

KissManga has listed the genres in different categories; you will also get a section of “New & Hot” additions, “Recent Additions”, and “Most Popular” additions.

Alternatives of KissManga and KissAnime

Here, you will get official and non-official listed. Choose among these, according to your preference.

Viz Media was established in San Francisco, California in July 1986 by Seiji Horibuchi. It has been popular since it was formed. If we talk about its credibility then you will find it a credible source that sells manga and anime. Nowadays, it is one of the most famous websites.

Its algorithm is very engaging; it was actually organized in that way. Viz has a huge collection of anime and manga. It has content for people of all ages. You will get literary as well as digital kinds of content. Users find this feature very attractive, they really enjoy this fact as Viz media provides printed copies of episodes from different anime series.

This site is created as a “Fan Zone” where users can post their photos in the gallery of “Fan Zone”, by doing that they will create a community. This reason also helps this site in gaining popularity. It has great reviews, content quality, websites functionality, and accessibility. You can download this application from the App Store and it is free. This App is successfully downloaded by almost 17,000 users and climbing.

ComicWalker and BookWalker both of these are Japanese sites, so it includes only Japanese content. Anime lovers basically want Japanese content. As it is a Japanese Website, you don’t need to worry about its removal. It upgrades its collection of books every week and month. This quality attracts readers to this site.

If you read many mangas, now you are thinking to read more and you ran out of stuff then you should probably try this website once. This site has a huge collection of Manga, so; you will get a lot more here to read.

On the home page of this site, you will get a search bar and the latest collection. But, some users say that BookWalker is not completely organized. They also state that you will get ads while reading.

Some of the users also complain about being slow while downloading the content from this website. You can get this Application at the App store for free.

As, I have mentioned above that ComicWalker is the sister website of BookWalker, like KissAnime and KissManga. This website focuses on the anime and not on the manga. If you love watching anime shows then you should check out this site.

Users state that this site is not so beautiful by its look but it is well organized. As it is organized it would be very easy for the users to search for anything. You can get content in English as well as in Japanese; this quality makes it more accessible.

You will get other alternatives of KissAmine and KissManga but that would be non-official websites. Some of these are also available as an app. Non-official generally means that it may or may not meet the same fate as KissAnime and KissManga.

Use these websites with security because not every website is secure and some can insert viruses to your devices.

Official websites pay the creators for their work but some of these sites don’t pay anything to the creators. Decide before investing your content in these websites.

There are some websites that are non-official in nature, these are:

You will get a separate sub-topic dealing with what is the meaning of KissAnime and KissManga. You will also get many alternative options for KissAnime and KissManga. If you use these sites for watching or reading anime then you must be going through different problems.  But, choose any website carefully because not all of them are secure. Some of them could become a medium for viruses in your device.