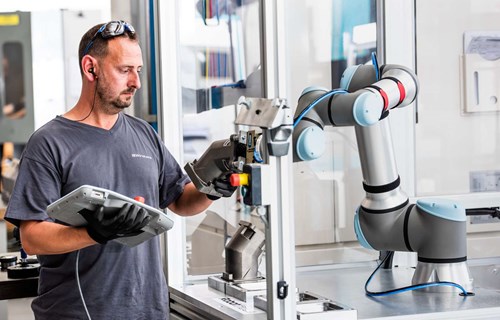 The global business environment is becoming increasingly competitive, requiring organizations and industry players to seek inventive ways to outperform their competition; one way is to automate their manufacturing processes.

Collaborative robots are a perfect development in the robotics field, as seen by their rising acceptance by various businesses worldwide. Because robots are simple to build, they keep control of production automation systems in the presence of human workers, allowing them to redeploy human ingenuity from annoyingly repetitive occupations to more value-added tasks.

Let’s take a closer look at these models.

It is the lightest collaborative robot having a total payload of three kilograms (6.6pounds). The cobot is perfect for an automated workbench and moderate assembly tasks.

The UR3e is 11 kilos (24.7 pounds) in weight, and all of its components spin 360 degrees wrist movements with limitless motion at the end. These characteristics make it a versatile and compact tabletop cobot for working securely with labourers.

Polishing, assembling, glueing, and screwing are just a few of the tasks where the UR3e comes in handy. This robot’s small size and ease of programming make it ideal for moving between tasks to meet industrial demands.

With a maximum payload of five kilograms, this cobot is also lightweight and versatile and features an arm that allows the operator to automate tedious processes and execute dangerous tasks.

It has an operating radius of approximately 33.5ins (850mm), allowing it to reach anything close to it, which is highly useful in freeing up personnel’ time from routine duties, hence focusing on improving efficiency in other production phases. The UR5e is similarly simple to program and swift to deploy.

The UR10e is ideal for heavier operations that require extreme precision and dependability. It has a ten-kilogram payload (22 pounds).

Heavy-duty collaborative operations, including packaging, palletizing, assembling, and pick-and-place jobs, benefit from its large collaborative robot arm. The UR10e is suitable for palletizing as it has a grasp radius of approximately 1300mm, making it very effective at performing jobs across a vast surface area.

This cobot’s versatility is unrivalled. The UR16e can be used for machine tending, delamination, packing, repackaging, and screw driving. It can also pick multiple information in a selection, making procedures far more efficient and fast turnaround times.

It has a 16-kilogram payload capacity, ideal for lifting and moving high equipment. O.E.M. robot systems with three adjustable Teach pendants are also available for the UR16e robot system.

Here are five advantages of using a collaborative robot.

They are called collaborative because of their capacity to operate alongside humans without causing harm to them. Unlike their forerunners, these modern robots do not require the use of safety cages like standard robots.

Aside from being easy to handle, cobots also reduce threat exposure to human workers by carrying out dangerous and difficult jobs at the workstation. Therefore, employees are alleviated from mundane and unpleasant activities, allowing them to focus on more important responsibilities.

Collaborative robots are inexpensive to purchase and set up because they do not require extensive assembly to function. The robots’ versatility also allows them to do various duties in a manufacturing facility.

Companies can expect a quick payback after purchasing a cobot because they are economical and versatile, allowing clients to automate multiple jobs in their manufacturing plant with just one collaborative robot.

Collaborative robots can function continuously, and unlike their human counterparts, they do not need vacations or holidays, hence boosting production output, which equates to more profits. A cobot’s average payback period is relatively 8 to 12 months when extensively put into use.

Accessible to Small and medium-sized businesses

Thanks to Universal Robots, small to medium-sized businesses can now integrate cobot use in their respective operations. This development has debunked the misconception that only big businesses solely use robots.

Collaborative robots are being used by small businesses around the globe to perform tasks including assembling, packaging, and offloading. Cobots are not limited to a single industry or application; rather, they are adaptable and competent in any programmed work.

They transform small manufacturers into smart factories by supervising production activities thanks to integrated measurement devices and sensors. Cloud computing allows data to be stored in data centres and software programs run from centralized servers.

Cobots eliminate the need to change the manufacturing layout by being easily movable from one assignment to another, and prior scripts are applicable for recurring activities.

Universal Robots also offers several extensions and software for modifying cobots to match the clients’ specific configuration and operational needs, such as palletizing, packing, machine tending, or any other sophisticated task.

The setup procedure of the robots has been reduced from weeks to only a few hours, courtesy of Universal Robots. These cobots are simple to install and incorporate into the workplace since they have an easy-to-use interface known as plug and operate.

These cobots are simple to install and incorporate into the workplace since they have an easy-to-use interface known as plug and operate. They don’t require extra electrical infrastructure; plug them into a standard socket.

Since these robots have a high-sensitivity inbuilt force-torque detector, all you have to do to train them is directing toward the desired waypoints.