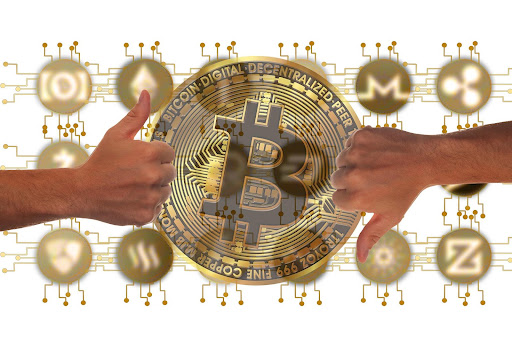 Bitcoin – the biggest name in cryptocurrency – has gained quite the fame in recent times. As a matter of fact, its popularity is reaching new heights every day, and the blockchain size has become 389.72 gigabytes as of April 2022, making it the king of cryptocurrency.

The key question that arises here is why are cryptocurrencies like Bitcoin gaining so much popularity? But before we get to that, let’s address some other questions.

What Is Bitcoin and How Did It Come into Existence?

Bitcoin happens to be the first one out of the 2100 cryptocurrencies that exist in the world today. Launched by Satoshi Nakamoto in the year 2009, Bitcoin is a digital asset that operates like the normal fiat currency but is a decentralized currency.

Nakamoto mined the genesis block of the blockchain and gave birth to Bitcoin – an open-source software – and since its birth, it has been traded millions of times. Not just that, but in fact, Bitcoin is seen as a legitimate means of exchange.

Cryptocurrencies like Bitcoin lie on a blockchain that ensures transparency as every computer tends to maintain its transaction records which can be compared with the records of others.

The value of Bitcoin along with some other cryptocurrencies, is determined using a basic demand-supply function. That being said, in 2020, during and right after the pandemic time, too many people were interested in purchasing cryptocurrencies which led to an influx of investments.

Although the supply of Bitcoins increases every day, the Bitcoin units available for sale tend to be less than in 2017, hence limiting their availability.

How Did the Bitcoin Become Popular Among Global Investors?

Bitcoin has managed to attract a huge number of audiences for investments. These investments include personal as well as corporate investments. As a matter of fact, companies now own approximately 4.5 percent of the total Bitcoin supply in the entire globe. What’s the reason behind this? Let’s have a look.

From being a mere fringe asset and having a reputation of holding value on the dark side of the internet to being regularized by governments, Bitcoin has come a long way. Not only is it gaining respect as an asset of the future, but it is also being accepted as an active mode of payment all around the globe.

Another successful development for Bitcoin is that PayPal has also announced that it will allow the use of several cryptocurrencies, including Bitcoin. Customers will have the freedom to sell and purchase Bitcoins on PayPal’s platform. Not just that, Bitcoins can also be used for performing transactions with the 26 million merchants of PayPal, hence aiding in the mainstreaming of cryptocurrencies. Other than that, many well-reputed global brands such as Shopify, Microsoft, and AT&T have started accepting it as a direct payment method.

Moreover, those brands that haven’t yet added Bitcoin as a direct payment method do offer alternate methods of purchasing from them using the Bitcoin Wallet. Several sites tend to offer gift cards that can be bought using Bitcoins and can be redeemed either at the online store or even in person.

See also  This Is How You Can Improve Your Credit Score

A Ray of Hope

In today’s modern world, money can be described as a form of technology that allows us to imagine futures. The excitement regarding digital currencies – such as Bitcoin – tends to illustrate that people feel locked out of the ability to have an asset that allows them to generate any form of wealth.

No doubt, Bitcoin holds the potential and the power to bring about a change in the lives of many people and skyrocket their success chart in just a few days. The reason why people all around the world are attracted to this investment is that it is available to the average individuals and not just the high average investors.

Anyone and everyone can invest in Bitcoin, and even the investment capital can be as low as $5. Undoubtedly, Bitcoin is the only digital currency that inspires individuals all around the globe and changed the lives of hundreds and thousands of people – especially in the past couple of years. Not just that, but Bitcoin had made common people millionaires when its price skyrocketed in 2020.

The Exciting and Thrilling Volatility

Many investors enjoy making an investment that brings a thrill factor into their lives. That being said, several investors like to buy Bitcoin as the volatility of this digital currency can be quite thrilling.

While checking the price of stocks tends to get boring as a regular activity, things are different with Bitcoin as there is constantly something new happening in the digital currency market. You can check the price as much as ten times a day, and you can notice it varies wildly. Also, it is easy to buy Bitcoins. Several websites, such as Coingate, provide secure ways to purchase popular cryptocurrencies such as Bitcoin.

Even though it’s clear that there are several reasons to be skeptical regarding digital currencies, but many traditional investors have been won over by Bitcoin. Undoubtedly, it has the potential to disrupt the world in the same way that the internet did in the 1990s.