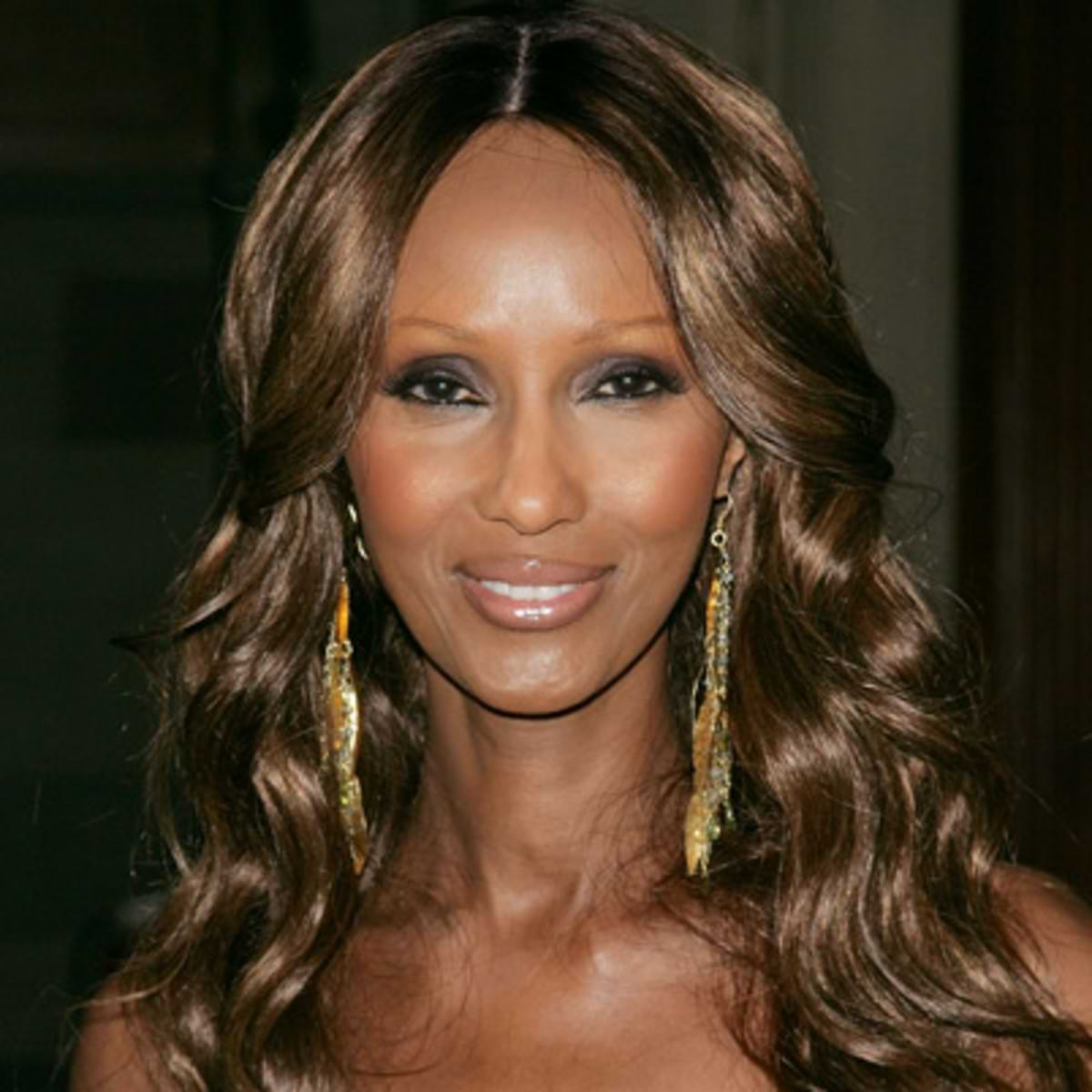 Iman is a Somalian-born model and actress.  A photographer named Peter Beard discovered her while she was a student at the University of Nairobi. In the 1970s and 1980s. Iman was a favorite and renowned model in Vogue and Harper’s Bazaar. It has been well known that fashion designer Yves Saint Laurent devoted the “African Queen” collection to her. Since retiring from modeling, Iman has done charity work in Somalia, started a cosmetics line, and married rocker David Bowie.

The early life of Iman

She was born on July 25, 1955, in Mogadishu, Somalia. She was one of the most sought-after fashion models of the 1970s and 1980s. She became a successful business executive in the 1990s with her own line of cosmetics. She got married to rock star David Bowie in 1992, she became a mother for the second time in 2000 after giving birth to their daughter Alexandria. “She broadened the definition of beauty,” declared Washington Post writer Robin Givhan of Iman’s stunning, exotic looks. “She made earthiness sensual. She helped to transform fashion into entertainment and models into personalities.”

The mother of Iman was a gynecologist and she named her daughter Iman, which means faith in the Arabic language.  Her mother believed that Iman was born with the hope that she will be prepared by the world’s challenges that she would face in the future as a female in Muslim East Africa. The parents of Iman were really progressive. Her father was a diplomat stationed in Tanzania, and under the law, he could have had multiple wives, but chose to keep just one. The parents agreed that their daughter should be sent to a private Catholic school for girls, which was considered more progressive than the standard Islamic education available to young females in the 1960s. There, Iman thrived. “I was a very nerdy child,” she told husband Bowie when he interviewed her for an Interview in 1994. “I never fit in, so I became laboriously studious.”

Iman was 18 in the year 1973 and was a student of political science at the University of Nairobi. She also worked as a translator to help pay her tuition costs. Photographer Peter Beard, a well-known figure in the fashion world, saw her one day on a street in Nairobi and was captivated by her long neck, high forehead, and gamine grace. He began following her and finally approached her to ask if she had ever been photographed. “The first thing I thought was he wanted me for prostitution of naked pictures,” Iman recalled laughingly about that day in an interview with Knight-Ridder/Tribune News Service writer Roy H. Campbell. “I had never seen Vogue. I didn’t read fashion magazines, I read Time and Newsweek. ” But when Beard offered to pay her, she reconsidered, and asked for the amount due to the college for her tuition, $8,000; Beard agreed.

Beard shot rolls of film of Iman that day and took them back to New York with him. He then spent four months trying to convince his “discovery” to move to New York and begin modeling professionally. He even leaked items to the press about her fantastical beauty and exaggeratedly claimed that she was descended from African royalty and that he had “found” her in the jungle. Another story alleged that she was a goat herder in the desert. When Iman finally capitulated and flew to New York, dozens of photographers greeted her at the airport. A press conference that day initiated her into the vagaries of celebrity and fame. “I was very surprised and offended that they could be so gullible to believe that all Africans come out of the jungle,” Iman told Campbell. “Somalia is a desert. I had never even seen a jungle. And I was even more insulted when they started asking the questions and talking only to Peter because they thought I did not speak English and I could speak English and five languages.”

Signed to the modeling agency Wilhelmina, Iman began a career on haute-couture runways and in the pages of fashion magazines such as Vogue and Harper’s Bazaar. She was instantly a favorite with designers and editors alike and was one of the first models in her day to be successful in both print and on the runway. French couturier Yves Saint Laurent even devoted a collection to her, “The African Queen,” and one of the most famous images of her career was a shot of her striding down a Paris runway in a Thierry Mugler design with a leashed leopard at her side. She led an admittedly jet-set life, as she told the Washington Post, and often squandered her earnings. “You earn an extraordinary amount of money almost for nothing at a very young age,” she told fashion writer Givhan. “I’d spend all this money to take the Concorde to Paris for a party and then come back. And I didn’t do it just once. [Modeling] doesn’t prepare a young girl for the future.”

She was more than just a model

In 1978, Iman got married to basketball star Spencer Haywood, with whom she had a daughter. She continued to model but she was sidelined for a time in 1983 after a taxi wreck. In 1987, she and Haywood divorced, but a custody battle over their daughter Zulekha, who lived with her father in Detroit, endured for six more years. In 1989, Iman quit modeling altogether. She was adamant about leaving the business permanently and not staging a comeback, as she told Bowie in 1994, “because then there is no grace in it,” she said in Interview. “So, when I decided to leave, I made sure that there was no cushion for me to go back to in New York. I sold my apartment; I severed contacts there, except with my friends, so that I would never have the excuse that, when something went wrong, I could go back to that as a cushion. I think I made one of the best decisions I’ve ever made for myself.”

Iman moved to Los Angeles, where friends introduced her to Bowie in 1990. They were wed in Lausanne, Switzerland, on April 24, 1992, and were remarried in an Italian church two months later. Initially, their relationship seemed improbable to many, and it was even suspected to be some sort of publicity stunt, but Iman and her husband proved to be one of the more enduring rock/fashion couplings of the modern age.

1. Iman Cosmetics was launched when the supermodel was on set for a US Vogue shoot and the makeup artist didn’t have any foundation for black skin tones. “When you work in the industry, your looks are your currency. If you don’t have a good appearance, you won’t be booked again – and no one will blame the beauty team or the photographer. This made me start experimenting with makeup from an early stage. I would buy any foundation with pigment so I could mix and match,” she reveals. The all-inclusive cosmetics range was launched in 1994, and features difficult-to-find shades suited for brown and black skin tones. Today, she is still involved with all of the product launches, and even sometimes manages the brand’s social media.

2. When she first started modeling, she pretended that she couldn’t speak or understand any English as a way to find out what people really thought about her. “This experience taught me a lot about the US. People described me as if I were not human, like if I was coming from another world. They said I was exotic… A parrot is exotic, I’m a person,” she said to Vogue Arabia. In fact, Iman was one of the only black models at the time, and remembers being paid a lesser wage than her colleagues for doing the same exact work. “As my career progressed, I became the first black model to refuse to work for a lower wage than other girls. To me, I was providing the same service, so I had to be paid equally,” she reveals.

3. Due to her conservative upbringing, she would hide her nude portraits photographed by Richard Avedon when her parents would come to visit her. “Combining my work with my religion was one of the most difficult things. It is complicated to be photographed in a provocative way, even if the pictures are artful. I shot stunning nudes with Richard Avedon, one of the most iconic photographers ever, and although I was proud of these images when my parents would come to visit me, I would hide them under the bed,” she recalls. “There was no way I could explain to my father that that was art. In fact, I never reconciled posing nude with my religion and family. I always say, may Allah have mercy on my soul if I have not done it right.”

4. She was very hesitant to have her picture taken by Peter Beard when the photographer initially approached her. “During my first year in Nairobi, a man stopped me in the street and asked if I had ever been photographed. I thought he was trying to pick me up, so I ignored him, but he insisted. To get rid of him, I said, ‘Yes, of course, I have.’ In my mind I was thinking, what do these people think – that I have never seen a camera?” she recalls. She allowed him to photograph her only if he could pay off her college tuition. She went on to pose for some of the most iconic photographers of our time, including Richard Avedon, Irving Penn, and Helmut Newton to name a few.