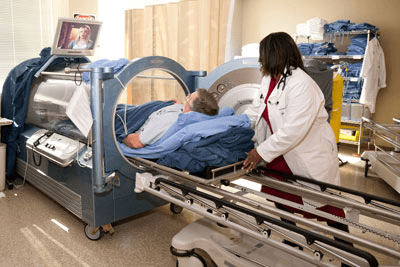 Hyperbaric oxygen therapy(HBOT) involves inhaling pure oxygen in a pressurized environment. Special hyperbaric chambers are made to breathe in pure oxygen in air pressure levels 1.5 to 3 times higher than average. A hyperbaric chamber is a sealed room with a series of bellows and valves, creating pressure that helps treat certain respiratory diseases. The goal of hyperbaric oxygen therapy is to repair tissues and restore normal body function. It is primarily used for treating.

d). Treating bubbles of air in your blood vessels,

Treating gangrene and other infections where tissues are starved for oxygen.

Under high air pressure, your lungs tend to gather more oxygen than usual. When the blood carries this extra oxygen throughout your body, it stimulates the production of stem cells and fights any bacteria throughout the way, promoting the healing process.

How hyperbaric oxygen therapy can change your life:

Many chronically ill patients suffer from the state of hypoxia, which means that there isn’t enough oxygen reaching its cell of the body or the oxygen-carrying capacity of the patient’s blood is abnormal. Hypoxia may affect the complete body or specifically certain regions. The primary symptoms may include the color of toes and fingers turning bluish due to poor oxygen circulation in the cells. Hypoxia can be commonly caused in people who smoke regularly, have diabetes-related tissue damage, have poor circulation, hampering the body’s ability to distribute oxygen evenly throughout the body. Hyperbaric oxygen therapy can prove to be extremely beneficial for people suffering from the above-mentioned chronic illnesses.

See also  How does your TDEE affect a calorie deficit?

Traumatic injuries due to car accidents, falling, or heavyweight issues can result in neurological problems and muscle swelling. The complications of traumatic injuries involve non-healing internal wounds and infections. Undergoing hyperbaric oxygen therapy promotes the circulation of pure oxygenated blood to the damaged internal parts of the body, promoting the growth of new blood vessels and tissues. The therapy has proved to be extremely effective in treating non-healing wounds because of poor blood circulation.

Due to the accumulation of pus within the skull, there are high chances of certain brain infections and inflammation. If left untreated, the severity of brain infections and associated damages can worsen the situation leading to coma or death. Along with proper medication and surgery, hyperbaric oxygen treatment can also aid in displacing intracranial abscesses. The bacteria that causes puss and other infections in the brain thrive in a low oxygen environment, hence undergoing hyperbaric oxygen therapy can be the potential solution. The complete process can gradually prevent the bacteria from replicating and spreading in the body, reducing intracranial swelling.

Look for reputable medical centers providing hyperbaric oxygen therapy near you to get treated under the surveillance of experienced doctors!